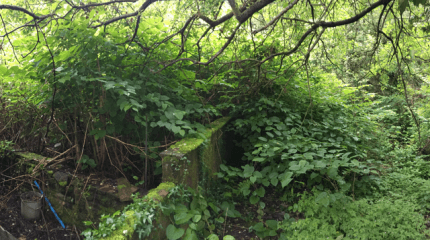 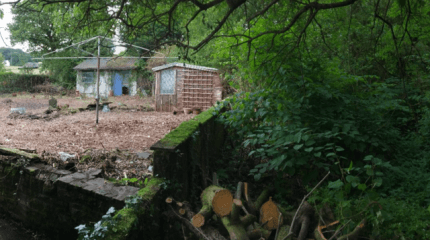 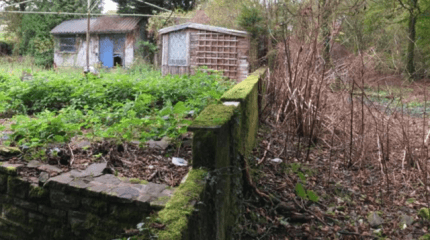 A perfect example of an effective and futile way to control Japanese Knotweed in the 3 attached photographs.

The photographs show an infestation which was growing within the rear boundary of two dwellings (separated by the concrete wall). We were initially approached by the landowner who owns the property to the right of the dividing wall and were asked to provide some advice and a quotation to have the plants treated. After conducting our site assessment, we suggested that it would be more prudent in the long term, for the infestation on both sides of the boundary wall to be treated with an approved herbicide, with the overall objective of total control being achieved within 3-4 growing seasons.

Whilst our client was very positive and was more than happy with the cost and treatment plan (which would have been divided between both parties), the other landowner was very sceptical and stated he would deal with the infestation on his own land, by initiating the services of a local ‘landscaper’. Consequently, the large infestation of Japanese Knotweed was ‘cleared’, by simply cutting the shoots and discarding off site. You will note from the photographs that this method is totally counter-productive in the long term. Furthermore, discarding any Japanese Knotweed material off site in this way also contravenes The Environmental Protection Act 1990.

The other landowner had paid a local ‘landscaper’ a considerable amount of money to ‘clear’ the large infestation of Japanese Knotweed, by simply cutting the shoots and discarding. Within a matter of 3 months the Japanese Knotweed to the left of the picture (which as stated, was cut and removed) is starting to re-emerge and will ‘resume business’ during 2018 after the oncoming winter.

The top photograph illustrates the infestation during June 2017. The second photograph is the scene in early July, whilst the third photograph was taken in mid September, subsequent to the Japanese Knotweed on our client’s property being treated with two separate applications of herbicide over the summer of 2017.

The shoots were roughly 7-8′ tall at the time of initial treatment and have clearly responded well to the herbicide. We anticipate some regrowth during 2018, yet the infestation will be reduced by around 50% and a further application of herbicide will be applied during the summer of 2018 & 2019, by which time we would hope to be close to achieving total control for our client.

The only viable method of treating Japanese Knotweed in these circumstances, is to treat the plants with herbicide and repeat over 2-4 years. Cutting / pulling the shoots from the soil will achieve absolutely nothing in the long term.

Another application of herbicide during summer 2018 will have the plants racing back to the pavilion in no time!